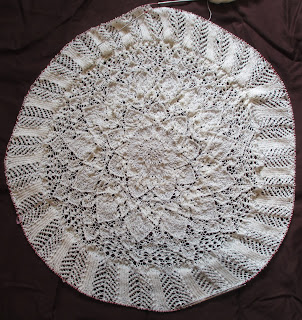 I'm on row 30 of chart 3. It looks a little pinched in due to the lifeline between chart 2 and 3. This is on both a 47" and 32" needle to try and show off the progress, and it still isn't big enough. Oy, vey, this thing is going to be a monster once its blocked. I'm still debating the whole "do I really want to put 3000 beads on the edging of this or not" thing. It seems weird to wait until the very edge to add in sparklies, and I can't help but wonder if it'll weigh down the edges or not. Enh. I still have a bit of time before that. :p

Strangely enough, not a ton of progress on other projects. :> I've turned the heel (toe up) on my mother's knee high sock, so that'll be basically blind knitting from here on out, thankfully.

2013 has started with getting started on one official knit-along and one "Ooh, what a neat idea! I should totally modify it!" year-long project. Oh, and one ninja giant sweater that the recipient has asked there be no photos of so it'll be a surprise. I'm just going to drop some numbers on you: 6'6" tall. 58" around. (Cue quiet sobbing.) The sleeves are done, but just the bottom ribbing of the torso (about 3") took 7 hours. Now I know why I don't usually track how long projects take me. (Also, the second knee-high sock for my mother. Scads of slightly variegated black 2x2 ribbing...>_< )

The KAL is the Evenstar shawl, as the manager/daughter of the owners of the yarn and fibre shop I spend oodles of time at has been roped into knitting one for a friend's wedding in July, and she decided she was not facing this on her own.

Cast on 1/13/2013. One week in and I'm on row 30 of the second chart. I plan on posting my progress on this on a weekly basis. And no, I have no real idea what I'll do with it once I'm done, but sometimes, spec knitting is fun, too. I had originally swatched this in red, but it was almost a cobweb weight, and I decided not to do that to myself on this shawl. Stash diving came up with this wonderful Lacey Lamb in off-white. Super soft and sqwooshy, and a pleasure to work with. 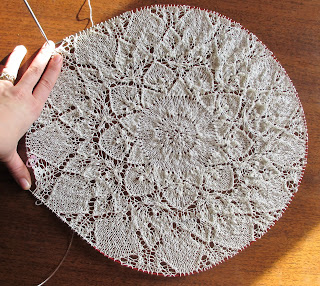 The other neat project is the "My year in temperatures" scarf that my sister-in-law told me about and is doing. But, because I can't leave well enough alone (and I live somewhere where there are some pretty interesting temp changes over the course of the day), I decided to knit two scarves; one for the highs and one for the lows. I also don't like the look of garter stitch, so opted for a 1x1 rib. Oh, and since I'm using fingering weight instead of worsted, I'm doing a back and forth for each day, so it'll hopefully get to a decent length. I love how different the days look when compared to each other! 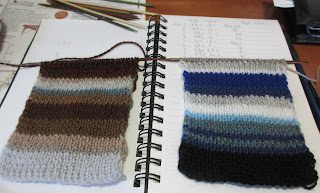