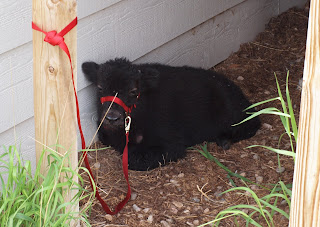 Last night, Daven and I (mostly Daven; I distracted Kate with tasty treats) yoinked Kai to start trying to bottle feed him. We should have done this at 3 days old, but were unsure of ourselves. Mea culpa. Now we know for next time.

Bottle feeding a baby who is used to mama and does not want to drink is a frustrating business. Patience is key, but we haven't had much success yet.

I do have a new definition of "too early". If you've been up and messing with livestock at least 2 hours before the feed store opens (needed a new halter), it is too early. ;)

So, he is now haltered (Twice; Daven got his ass roundly kicked by him both times and is now sporting a limp, several head wounds and a crushed hand. Yaks are feisty.) and tied up to get used to the idea of staying still. Water left nearby him, which he of course has already splashed out, mostly. That's OK, I'll keep refilling it. This is a process, and he will come around. Even before we haltered him the second time, I was able to pet his face and neck, but he just got too skittish to let me put the halter on him without being restrained, yet. It will come.

Re-posted to The Silly Yaks blog, for ease of sharing.
Posted by braveharlot at 12:29 No comments: