Pictures! And a story!

Because pictures will totally distract you from the lack of content for the last month, RIGHT?!

...Well, maybe not. At any rate. Look! Finished Objects! (That I totally already posted on Facebook, but not everyone is on my Facebook and really, you can probably deal with them a second time because I am proud of myself, alright?) 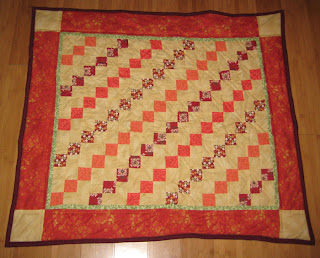 The back of my first quilt! Hand quilted, baby. 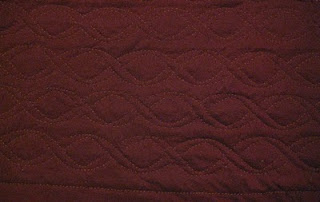 My first real lace shawl, because I always would bugger them up, get frustrated and wander off before! 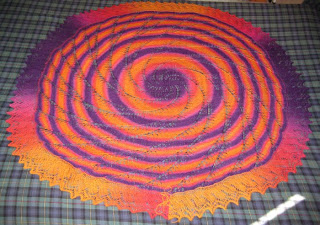 The local hippies will love this shawl. 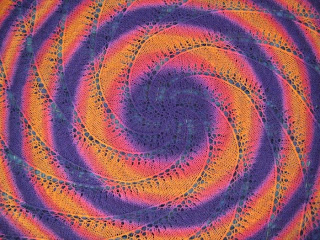 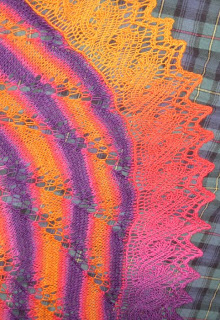 Now I'm working on more quilts. Yes, plural, because this is me and you know I can't possibly only have one project of any type going on at a time. There's a long term scrap quilt that I'm literally only going to be working on when I finish other quilts, so they get represented in said scrap quilt, and my main lap quilt. I went into Joann's with A Plan (TM) but it was so not crowded that I ended up poking around and swapping out the planned fabric for another that I totally fell in love with. I still giggle about finding beautiful fabric, bringing it home and cutting it into little pieces. Quilting is weird, yo.

Whilst shopping, I had a really fun little encounter. Daven and I were standing at the fabric counter, waiting to get all of our stuff cut out, when an older gentleman and what looked to be his 10 year old grandson walked in. The grandfather had a scarf and some knitting needles clutched in one hand and asked the girls working if they could help his grandson, since he'd knit a scarf and now he wanted to knit a hat, but needed different needles. After the reply of "Oh...I don't knit..." was emitted (LAME, CRAFT STORE WORKERS. AT LEAST ONE OF YOU SHOULD KNIT.) I volunteered my services. I brought them back to the knitting aisle, talked about DPNs vs. circular needles and he decided that circulars sounded less scary. I grabbed him a set of size 10s, to match his straight needles and off they went. It really made me happy to help someone, and it reminded me how much I miss teaching. (I spent a year or so as an Event Coordinator for Michaels, which involved making a lot of displays and teaching some classes, including a weekly kid's craft class. It was fun, though hard on my knees, since when I wasn't in the classroom, I was working the floor.)

Also, because this is me, I'm second guessing everything I did. I told him to cast on and make sure that the stitches weren't twisted, but does he know what that looks like? I totally should have grabbed the scarf and made admiring noises at it, though I did say it was really awesome that he was learning how to knit. Ah, well. I hope he's knitting on 'em and isn't too frustrated. They were so thankful, it was really touching.

In other craft news, I gave my mother 4 pairs of socks that I'd hoarded over the last year and she still wants more. I think I'm going to be trying that sock-a-month thing again, just to keep Mrs. ColdFeet in socks. :) I'm still working on Daven's never-ending cabled sweater (just a few more inches on the first sleeve, then all of Monkey-Arm sleeve 2). Let me tell you, learning how to cable without a cable needle was like discovering fire. So. Awesome. And it save so much time! There's also the great big knit blanket that I'm doing the second tier of cabling on, a pair of fingerless gloves that I cast on in hopes they'll help me whilst at my computer and my purse sock, which gets worked on whenever I have to wait anywhere. Oh, and the weaving, which I have sorely neglected due to general malaise towards it. The same applies to spinning, which hasn't been worked on in a while. It'll happen. But first, I'm going to go quilt some more. A girl has to have some variety in life! *grin*
Posted by braveharlot at 20:10 1 comment:

Because I don't have enough hobbies, right?

In addition to the knitting and the weaving that were already on-going, I dragged my cross stitch back out, and over the weekend, started quilting.

The quilt is very fall-coloured, and I think it looks nice, if a little 70's-retro. Photos will happen eventually.

I also finished up the actual knitting on the Maelstrom shawl of psychedelic colours yesterday evening, and just need to block it. That will likely happen today. I'd been pouring most of my hours into this, so hopefully there will be forward momentum on other projects now that it is done.

My weaving has been sadly neglected, since I got distracted by many "ooh shiny!" things. Today is Wednesday, so it is for weaving, dammit. I shall get some work done on it. (The problem being that I'm not sure I love this project, and it is hard to work on something you're "meh" about.)

The cross stitch is hilarious. This is a sampler that I started...well, there is a notation on the pattern about buying my sister's 25th birthday present, and she's 35 now. Yeaaaaah. I also immediately remembered why I had put it down. It is done on 22 point fabric, generally over two blocks. The parts I have left are all over one thread, so this is reaaaaally fine work. I'll do it, but you can only look at something that closely for small amounts of time before your eyes start stabbing you in the brain. There really is not very much left, and maybe I'll eventually finish it. I also dug out all of my previously finished, but un-framed cross stitch projects. I really need to get those framed and up somewhere; there are some really beautiful pieces in there.
Posted by braveharlot at 11:17 No comments: