I missed National Sweater Day on February 9th. Aw.
Posted by braveharlot at 22:49 No comments:

A different kind of WIP

Yesterday I had the first session of my back piece. This is being done by the same amazing artist who did my phoenix, and I'm super excited about it. I've got 3 more appointments scheduled (March, June and July), but will hopefully sneak in for April or May, as well, if he has any cancellations. 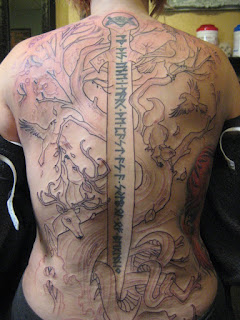 My world is fixated on blankets right now. I've been designing a quilt for my nephew for longer than I'd like to admit, and after deciding that no, this is not a new breed of self-finishing project, I brought it back out and did the hard parts. I'm debating if I want to sew or draw little faces on these guys or not. Keep in mind, it is intended for a 3 year old. The grey, red, yellow and green are all flannel, for a little contrast in touching the blanket. 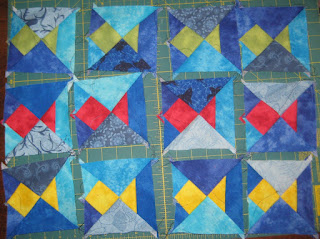 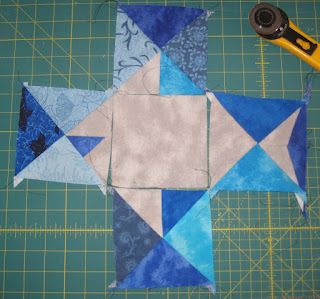 Sharks! (The tail was a particular PITA, but I'm pretty happy with how it turned out.) 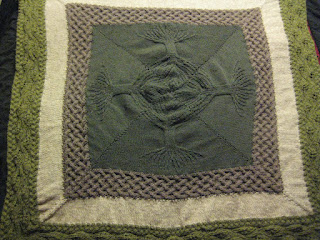 And a now-already-outdated pic of the Yggdrasil blanket I'm working on. Finished the leaf border a couple of days ago, and I'm doing another cream stockinette border before finishing it off with the grey knotwork. I'm messing with this border a bit to try to make the finished blanket a rectangle instead of a square. It looks a little strange and lumpy around the middle, but I'm hoping that'll block out. Blocking this will be exciting, since I don't actually have anywhere larger than a queen size bed to block on. Ah, well. I'll worry about that more when I'm closer to finishing.

Edited to add: It was only after I posted these pictures and thought "ah, just squares left on the middle part of the quilt!" that I had that Bad Feeling(TM). Upon checking, I found that yes, all of the sharks were made to be facing the same way, when two of the 4 needed to point the other way. Stupid non-interchangeable shark faces. *tears them apart, fixes and puts back together*
Posted by braveharlot at 16:40 1 comment:

Sometimes, when you have a really complicated project (or two), you've just gotta do something quick and fun. This sweater? Totally quick and fun, and used yarn from the stash, so, bonus on that! 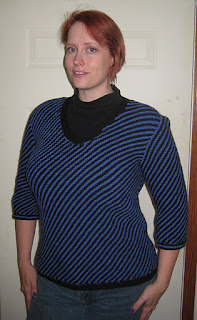 Please excuse my hair. I had just put on the sweater and Daven is not good at telling my my hair looks like I've been attacked by static monsters. I also look stoned. I was not. (This is a V neck sweater, I was just wearing a mock turtleneck shirt under it.) 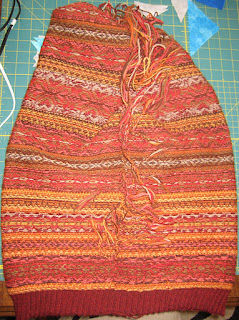 This is the inside of the Fair Isle sweater. It is a lot of ends. The pattern had said "leave a long tail and braid them all together to finish", which I thought sounded clever. In reality, that turned into a big clunky mess. So, after several iterations of attempts, what I'm doing is this: 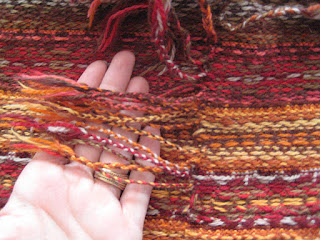 That would be making a billion tiny braids (typically 3 strand, occasionally a 4 or 5 strand will sneak in if there aren't enough buddy strands for it to fit in elsewhere). Then I weave those little bastards in: 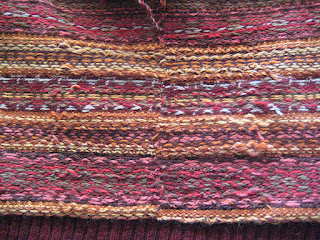 And ta da! I think it looks pretty good and there won't be the threat of the holes between colours opening up due to teeny knots and then neurotic braids. The downside is that, well, this is REALLY SLOW GOING. Mostly due to the fact that it totally messes with my left wrist, which has been rather tetchy recently anyway. So, I can only work on it for about an hour at a shot. Eventually it will be done and will look wonderful and hopefully fit. I'm really not sure on that point, and since there are no arm holes, it isn't like I can try it on. If it does not fit me, I will gnash my teeth, shake my fists at the sky and give it to my mother, who loves Fair Isle sweaters, is much narrower than me and shares my tastes in colourways. I'm kind of hoping it will fit me, though. Funny, that.

My next update will include photos of the progress I'm making on the bigass blanket I've been knitting for over a year. Strangely, when I stopped working on it for about 10 months, it failed to grow at all. Now that I'm working on it again, it is once more growing. Funny how that works. :p For the curious, I got hung up about halfway through the first side of the leaf border. Now, after about 2 weeks, I'm approaching corner 3, with only one more side to go on it. I finally memorized the damn pattern, which helps. It is a little wiggly, so it took a while to get into my fingers, especially with the 10 month break.
Posted by braveharlot at 13:28 No comments: