When a girl's thoughts turn to...working on that big heavy sweater of Daven's. I'm blaming it on the fact that I came across it again when I was packing up. I finally finished the back last night (with about 3" extra knitting to accommodate for Daven's Mighty Shoulders), and now I can finally get started on the (stupidly long) arms. At least those won't be as ridiculously hot to work on during the drive to CO, even if Daven has monkey arms that take forever to knit for.

Socks continue, of course, as well. I'll get the April work shots up eventually; probably after I clear off the guest bed enough to take a picture of the blanket that I finished. (I realize the majority of people who even read this blog have already seen it in person, but it's so I can remember what I make. Some months I feel so unproductive, it is nice to see that I really am making a lot of stuff.)

Now, off to pack up the couch to give to Dave and Britt. The next week will be crazy. More non-knitting stuff will likely leak into the blog, but don't worry, I'll stay pretty fixated.

Also, hi to the lovely lady who found me via Pioneer Woman! *wave* Yes, we totally need to teach Ree to knit. You know, in her copious amounts of spare time. *grin*
Posted by braveharlot at 10:39 1 comment: Links to this post

This year's MD S&W was a bit different from past excursions, but very fun.

The weekend started with Jennie and Happygoth coming up from Atlanta late Thursday night. Within 5 minutes of their arrival, there was an epic battle around the living and dining rooms with the Nerf swords. Just having them around made me so ridiculously cheerful that I stayed giddy through work on Friday, and I was more of my "yay, stuff is awesome!" self, rather than the "meh, stuff sucks and I'm tired" self, which gave my coworker pause. He playfully accused me of saving all of the grumpy for work, which was terribly thoughtful of me. *chuckle*

I left work early on Friday, to make up for some hours that I'd worked extra the week before, and once I got home, we started working on the evil plan that I'd hatched halfway through the work day. This was the painting of our new 6'x12' trailer that we bought for moving purposes, and for general "haul stuff" once we arrive in CO. 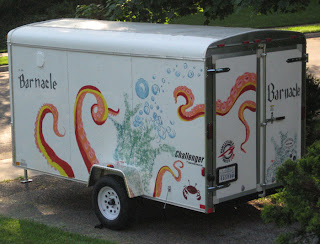 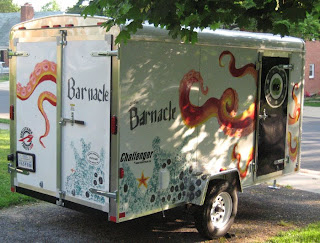 Daven's sister Rattlefox appeared about halfway through the painting the first side, and dove right in to helping us paint. She is the creator of the slightly dazed looking crab. Dave also popped by to escape some traffic and helped out. I love the end result. It makes me feel like I should run away and join the circus! I look at it and have to grin; it is too ridiculous not to.

After we were done getting high on paint fumes (Whee!) we hit our favourite sushi joint and had yummy bento boxes. The girls played dress-up with the stuff I have left over from the big "please take away my stuff" purge, then sat around and knit in the living room before turning in relatively early for our big day on Saturday.

Saturday, Daven got up early to cook a fabulous tasty breakfast, which we enjoyed immensely. Rattlefox had stopped to get donuts, which we each cut chunks out of to sample, and they were AMAZING. *drool* I think we'll have to stop and pick some of these up on the first leg of our move, since we'll be heading to her place first. So, after breakfast, Spyke came over and we headed off to the festival, following some kilt-based shenanigans.

That took a while. A long while. For, lo, MD S&W has become STUPIDLY popular, and it ended up taking about an hour and a half to go about 4 miles. Highway 32 sucked. On the upside, we had a lot of fun and silliness with the herd of folks in the van, but, dude. We had planned to arrive around 10:30, and it was closer to 11:30 when we arrived. That was no fun at all.

Once we got into the last portion of the drive, Daven went off with the van to park, and the other 5 of us got out to walk the quarter of a mile or so to the show. Also, to have dandelion fights, as we do. :) Once we were in the festival, we met up briefly with our friend Jim and his wife, before beginning the shopping spree. After fighting similar traffic (though we warned him to not use 32, so he missed that nightmare) Bald Scott made the good call of parking a mile or so away from the festival and walking, rather than dealing with the retarded parking traffic. Food was attained (though, since it was nearly 90 degrees and I don't deal with heat well, I mostly lived off of strawberry lemonade for the day) and once we stopped feeling all angry and hungry, shopping for the fibre fiends continued, whilst those slightly less interested in the difference between a Romney and a Lincoln cross fleece went to sit and enjoy the people watching. Darcy helped me select a couple of fleeces and when we went back to deposit these relatively heavy items to our fibre sherpas, they cleverly made a base camp under a small, but useful tree. Dave and Britt turned up and joined the merry gang of folks sitting under the tree. Further shopping excursions were made, but we would constantly re-group with the pile of stuff and people. During one of these lounge breaks, Colleen happened past, whilst taking some fibre to be processed, and to pick up a few big bags of finished yarn. I volunteered Scott and Spyke to sherpa for her, as there was a whole lotta yarn involved. (So pretty! But I'm kinda trying to behave. And yes, though I bought some stuff, I didn't buy nearly as much as I did last year, and most of it was on my mental list.)

Beside the oppressive heat that prevented me from really being able to eat anything (ugh), what was really weird for me was that they had rearranged the vendors a great deal. Basically, if someone had a tent, and was popular, they got moved to the back 40. That sucked for them; they'd previously been in very highly trafficked areas, and we spent most of the day going "man, I wonder where vendor X went to...maybe they aren't here this year..." before finding them right at the end of the day. I spoke to a couple of the vendors, and they were just languishing. Yes, I understand that they did this for safety reasons, but this seemed to be a last minute change of location, as evidently they were not on the site map. Yes, you should totally take some of your most popular vendors and isolate them so they have a terrible sales year. Great plan! *smack smack* If I was a vendor, I would be seriously pissed off. They were trying to be upbeat, but as I've been on their side of the table...this was tough. :/

We managed to close the place down (a first for me), which meant the lion's share of exit traffic had already dispersed. There was a caravan to a fantastic Mongolian joint near Scott's house for dinner, with Daven, myself, Jennie, Laura, Darcy, Scott, Dave, Britt and Spyke slowly becoming more human again following food and lots of water.

I'm still a little dehydrated today, but I had a fantastic time. I was so happy to visit with so many folks that I don't see nearly often enough.

And the haul round up:
1 Romney fleece; dark gray. Skirted, but otherwise unprocessed.
1 Rambouillet fleece; 2 shades of gray. Same state of unprocessedness.
4 hanks of sock yarn from Creatively Dyed.
1 hank of sock yarn from Spirit Trail Fiberworks. This is so luxurious. 75% superwash Merino/15% Cashmere/10% Bombyx silk, in the "Firedance" colourway. I totally have to buy more yarn from these people. Everything I touched made me go "oooh!"
1 astonishingly soft black fur hat that is totally an old lady hat and I DON'T CARE BECAUSE IT IS AMAZING. Also, I usually look like a moron in most hats, but I don't in this. *beam*

And more fibre-related goodness: Whilst I was lamenting being so far away from MD after the move, Rattelfox cheerfully brought up the Estes Park Wool Market. Yeah, that'll be an hour and a half from our new house. Yes, even after hitting MD yesterday, I'm totally going to Estes Park in a little over a month. YAY! *happy wiggle* Hopefully I'll find good suppliers for critters that will be semi-local to me! Plans are already being hatch to get Jennie and HappyGoth out for that one next year. *glee*
Posted by braveharlot at 15:14 1 comment: Links to this post